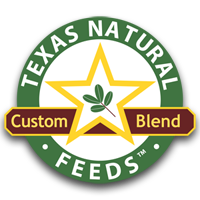 Texas Natural Chicken Feed is an affordable, commercially- grown non-soy, non-GMO, non-medicated feed. For those concerned with the potential health issues of soy and genetically modified products, Texas Natural Feeds is the most affordable alternative to commercial-type feeds.

Want to know what makes it Texas Natural Feed so great? Texas Natural Feed is made up of Peanut meal, sorghum grain, oats, brewer’s yeast, fishmeal, probiotics, diatomaceous earth and a vitamin/mineral premix. Texas Natural Feeds has a 50% increase in vitamin content over standard commercially-grown feed. no GMO’s, no medicated feed, just all natural.

To insure non-GMO standard, the feed is tested by an independent lab. Tests show that Texas Natural Chicken Feed is one of the purest non-GMO feeds available on the market!

So if you are looking for an affordable alternative to the high cost of organic feeds and still want the great benefits of non-soy, non-GMO and no medications, come by Steinhauser’s and try Texas Natural Feeds!

This entry was posted on Sunday, January 22nd, 2017 at 10:15 am and is filed under News & Updates. You can follow any responses to this entry through the RSS 2.0 feed. Both comments and pings are currently closed.