Taking cues from human medicine: Pregnancy is not a time to skimp on nutrition 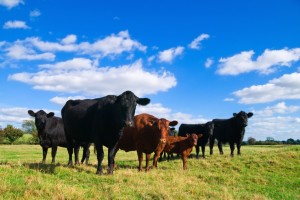 Would a human medical doctor advise a woman to lose weight while she was pregnant? Probably not. Yet that’s exactly what happens to a large percentage of beef cows as they advance through pregnancy. Research continues to show that there may be a better way of caring for cows during gestation – with consistent nutrition helping to optimize the cow’s performance, as well as that of their offspring.

This realization is coming after evaluating several decades of human medicine research. Quite often, animal research is applied to human medicine. In this case, we’re looking at the scenario in reverse. Studies of women who were deprived of nutrition during pregnancy have shown long-term consequences for the health of the babies they were carrying. Similar long-term effects are possible in the cattle industry.

One of the earliest of such studies looked at the later health of babies that were in-utero in the midst of the Dutch Famine during World War II in 1944-45. When medical researchers looked at the long-term health of those individuals, they found that maternal malnutrition resulted in offspring that had significantly higher incidences of health challenges in adulthood, including coronary heart disease, glucose intolerance, high blood pressure, obesity and asthma.1

The researchers noted that the babies in that study were of normal birth weight, suggesting that adaptations that enable the fetus to continue to grow may nevertheless have other adverse consequences later in life.2

Hundreds of subsequent studies have connected maternal nutritional deficiencies and stress with physical and mental setbacks later in life.  Researchers have identified this phenomenon as “fetal origins” or “fetal programming,” concluding that the gestation period is the most consequential part of life, permanently influencing the wiring of the brain and other critical organs such as the heart, liver and pancreas.3

They say these changes are due to a concept called “epigenetic modification,” in which genes do not change but express themselves differently due to changes in DNA.4 This idea could have important implications for the way we feed and care for pregnant beef cows.

Pregnant women are advised to take prenatal vitamins, eat a healthy diet and get plenty of exercise and rest. In comparison, what do we do with our pregnant cows? During early and mid-gestation, cows are literally “eating for three,” as they still are nursing a calf, while growing a fetus and trying to meet their own nutritional needs. In many management situations, once cows are confirmed pregnant at weaning, they fend for themselves that last trimester on poorer quality pasture for several months.

As the season progresses, grass quality declines as the fetus grows. Late in gestation, many cows are losing weight and body condition at the same time that fetal demands for nutrition are the highest.

Given our investment in genetics and efforts to promote performance of calves after they are born, it may be beneficial to feed calves more aggressively through their mothers before they hit the ground.

Research proves the impact of nutrition

While cattle may not need to worry about some of the health concerns of adult humans, it is important to consider if fetal programming could influence important, cattle-specific factors like immunity, muscle tissue development and fertility.

Because 75 percent of fetal growth in calves occurs during the last two months of gestation, it once was thought that reduced maternal nutrition earlier in pregnancy was of little consequence to the developing fetus. But limbs develop as early as 25 days after conception, followed closely by important organs such as the pancreas, liver, lungs, brain and kidneys.5 Ovaries begin to develop around days 50-60, with critical follicular development starting around day 80.6

It also is important to consider that muscle fiber numbers do not increase after birth,7 and the sites for intramuscular fat accumulation and marbling formation also are created during fetal development.8 Skeletal muscle development is a lower priority in nutritional partitioning compared to the heart, brain and other organs.9 This is what we can infer from the priority of fetal nutrients: cattle do not need to produce extra muscling for survival, they only need a certain amount.  Although muscle is the single most important economic tissue that cattle produce, it would appear to be one of the first tissues to be compromised by subpar fetal nutrition.  Why is this?  Extra muscling requires “both ample and missing nutrients during fetal development”.  Albeit, there are more questions than answers as the beef scientific community is still in the learning stages, but progress has been made in evaluation of cow nutrition on muscle development.

Specifically, beef cattle research looking at the influence of fetal programming on offspring performance has shown:

These findings lead us to conclude that, just like humans, pregnant cows need a consistent plane of nutrition throughout gestation. For the growing fetus, there is no “catching up” after it has passed critical developmental stages. Nutritional supplementation during all three trimesters of pregnancy could allow calves to maximize their genetic potential, and increases the probability of superior calf growth and performance.

This entry was posted on Tuesday, June 17th, 2014 at 10:19 pm and is filed under News & Updates. You can follow any responses to this entry through the RSS 2.0 feed. Both comments and pings are currently closed.