Fall Armyworms on the March Across Texas 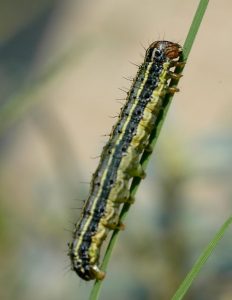 As of late July:

Fall Armyworms are on the march across texas. Cooler temperatures and widespread rain events across Texas have forage and crop producers scrambling to fight armyworms, according to a Texas A&M AgriLife Extension Service expert.

Above all, be proactive: view Steinhauser’s armyworm preventatives and treatments.

Vanessa Corriher-Olson, Ph.D., AgriLife Extension forage specialist, Overton, said inquiries about the pest have inundated her office after dry conditions were followed by a cool front and rain events. These are ideal conditions for armyworm outbreaks.

“I spent all of Friday taking calls on armyworms. The entire day,” she said. “So, it is an issue. I’m hearing from Central to North Texas mostly and have not heard from anyone in West to South Texas. With most of the state out of drought and temperatures where they are, it’s hard to imagine they are not everywhere.”

Corriher-Olson said irrigated fields like most forage production meadows in the Panhandle may be especially susceptible to the pest. Mainly because of forage quality and quantity.

Harvesting forages can be a quick solution to climbing armyworm numbers because they do not consume dry plant matter, she said. They will, however, consume freshly cut grass, and should be treated when armyworm numbers are beyond three or more caterpillars per square foot.

Corriher-Olson said it is critical that producers have pesticides ready for applications as soon as armyworm numbers near the recommended threshold. In those numbers treat immediately. They consume 85% of their diet in the last two or three days of their larval stage.

“The big question is how long will they be a problem. The answer is until the first killing frost,” she said. “Armyworms are not a ‘spray once and they won’t be a problem’ kind of thing. This could be a two-, three- or four-spray situation if forage for hay or grazing is valuable to them.”

Armyworms are green, with brown or black colorations and can be identified by the white inverted Y on their head. They can grow up to 1 inch in length when mature.

The pest got its name because they appear to march across hay fields, consuming the grass in their path.

Armyworm moths can lay up to 2,000 eggs that hatch in two to three days, according to a 2019 report by Allen Knutson, Ph.D., AgriLife Extension entomologist, retired.

Corriher-Olson said there are four to five generations that move throughout the state per growing season. They typically move north from Mexico and South Texas as temperatures warm in the spring. Generations will push further north into Midwestern states, but moths and larvae remain present throughout the state.

“They are there the whole time, we just may not see them due to their size, numbers or both,” she said. “It just takes the right weather conditions, and you can see an explosion in a matter of days.”

Corriher-Olson said armyworm caterpillars are picky eaters and prefer high-quality, fertilized forage typically found on fields maintained for hay production. They are a common pest of Bermuda grass, sorghum, corn, wheat, rye grass and many other crops throughout Texas.

Producers should scout each morning for armyworms, she said. Armyworms are primarily night feeders unless conditions, such as cooler temperatures with overcast skies, allow. They try to avoid warmer daytime temperatures.

“It’s important to act immediately. If armyworms are left unchecked, they can devastate a forage crop in a matter of hours,” Corriher-Olson said. “I’ve seen entire hay meadows that were consumed overnight.”

Be ready, be proactive

Pesticides are the only way to prevent armyworms from consuming existing stands or new growth post-harvest, Corriher-Olson said. Products directed at controlling armyworms in the larvae stage are available.

Corriher-Olson recommends insecticides labeled for armyworm control in pastures and hayfields, including pyrethroids, which are affective in killing the caterpillars. But a combination of pyrethroid and growth inhibitor is recommended.

“The pyrethroid only takes care of the ones that are in the field while the growth inhibitor provides a residual affect that will kill new hatches and any caterpillars that migrate into the field,” she said.

Applicators should always follow all label instructions on pesticide use and restrictions, she said.

Corriher-Olson said she was not aware of any pesticide shortages. However, she suggested producers should have products on hand. In addition, prepare for immediate action When armyworms are near threshold.

“I thought there might be short supplies due to trucking or workforce, but I have not heard any complaints from producers or concerns among suppliers regarding product availability,” she said. “But you want to have products on hand and ready. Just follow the proper storage directions and it will be fine.” 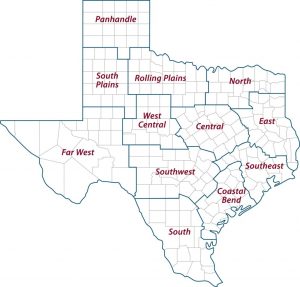 Temperatures were slightly below normal. Topsoil and subsoil moisture conditions were excellent. Precipitation amounts received so far this month were approaching all-time record levels for the month of July. More rain was in the forecast. Corn was drying down nicely, and sorghum fields had all changed color. Harvesting may start in a couple of weeks if drier, warmer weather resumes. The cotton crop was improving and producing bolls as the soil dried. Potassium-deficiency symptoms were noted in cotton. As a result of wet conditions. The hay crop quality appeared good. It was mostly baled in advance of further armyworm damage and rainfall events. Fall armyworms were common across both rural and urban landscapes following the recent wet weather. Widespread spraying continued. Livestock were in good condition.

Rain showers hit or miss. Topsoil moisture was getting short. Pastures were in excellent condition for this time of year. Sudan grass and native rangelands were thriving. Approximately 400 additional acres of Sudan grass were planted for bale production. Wheat was still being harvested, but remaining fields were very poor quality and load refusals were reported. Producers who were plowing wheat fields stopped plowing because moisture levels were too low. Cotton was beginning to establish and benefit from the abundant soil moisture. Conditions were ideal for grasshoppers and armyworms. The pests caused problems for hay producers. Especially those who continued to cut and bale pastures.

Crop conditions continued to deteriorate under more rain. Consequently, some fields were still holding water. Sorghum heads were sprouting. Sugarcane aphid populations were increasing in grain sorghum. Corn was mature and needed harvesting, but field conditions were too wet. Cotton was shedding bolls due to excess moisture. Rainfall during rice pollination was estimated to reduce rice yields 5%-10%. Pastures were lush and should produce heavy hay yields as soon as conditions dry enough. Armyworms were spotted in fields and pastures. Cattle remained in good to excellent condition with all the grazing, and market prices were on the rise.

Wet weather conditions continued to cause delays and problems for producers and landowners. Pasture and rangeland conditions were good. Subsoil and topsoil conditions were adequate. Armyworms invaded the district, with Smith County reporting heavy infestations. Horn flies, horse flies and mosquitos were problematic as well. Livestock were doing fair to good. Wild pigs increased activity and have been a district-wide issue.

Very wet conditions continued across the district. Rainfall totals varied from just under 1 inch to over 5 inches. Continued rain showers were causing significant weed growth, and farmers were busy spraying to keep them under control. Producers were also spraying cotton with growth regulators to limit plant size due to all the rain received. Cotton started blooming in some areas. Insect pressure in cotton remained low. Pastures were in excellent condition. Corn was in good condition and sorghum will be heading out soon. Cattle were in good condition.

Northern and central areas reported short to adequate soil moisture levels while southern areas reported adequate soil moisture. Weather was unseasonably cool with high temperatures in the mid-80s and lows in the low-60s. Producers were trying to control weed pressure produced by recent rainfall events. Pastures and rangelands were in fair to good condition. Winter wheat and oats were harvested. Wheat yields were surprisingly good despite all the rain. Corn was in good to excellent condition and many fields were just now tasseling. Sorghum, cotton and soybeans were in fair to good condition. Cotton needed additional heat units. Peanut conditions were good.

Topsoil moisture throughout the district was mostly adequate. Conditions were hot and dry before turning cool. Showers delivered up to 3.5 inches of rainfall and improved drying soils. Summer pastures looked very good. Producers were busy spraying for fall armyworms in pastures and hayfields. High numbers of grasshoppers were reported in pastures, hayfields and crops.

Temperatures remained moderate with lows in upper 60s and highs in the mid-90s. Monsoon rainfall continued across the district over the past week with 0.3-2 inches reported. The frequent rains have created a shallower root system in crops compared to most years, and more rain would benefit dryland cotton, which was beginning to show moisture stress. Grain sorghum fields were heading out and blooming. Growers had most weed issues under control, but herbicide-resistant pigweed was becoming a larger problem each season. Cotton flea hopper numbers were higher than in most years. Melon harvest continued. Pastures could use another rain.

Thunderstorms brought more timely rain to most parts of the district. Subsequently, temperatures were unseasonably cool. Pasture and rangeland conditions were unusually green for mid-July, and soil moisture levels were in good shape. Hay producers were busy cutting and baling. Producers were gearing up to spray hay fields following reports of armyworms. Rangeland conditions continued to improve due to excellent soil moisture and growing conditions. Livestock were in fair to good condition. High grain prices continued to cause uncertainty in the cattle market.

In areas of the district, wet conditions continued. Grimes and San Jacinto counties reported issues with armyworms earlier than normal. Rice was progressing and starting to head out. Pastures and hay meadows were growing, but producers were unable to harvest due to excessive moisture. Wet conditions could cause a hay shortage if fields do not dry enough soon. Rangeland and pasture ratings were very poor to excellent with good ratings being the most common. Soil moisture levels ranged from very short to surplus with surplus being the most common.

Moderate temperatures were reported with scattered showers across the district. Rangeland and pastures were in good condition. Haygrazer was cut and baled. Producers were waiting for some fields to dry before harvest. Sutton County reported a large infestation of grasshoppers. Corn and grain sorghum crops continued to mature. Cotton continued to mature. Cattle, sheep and goat markets looked good. Livestock and wildlife were in good condition. Antler development on whitetail deer was expected to be better than average.

Light showers and mild temperatures continued. Temperatures were below normal. Soil moisture levels were adequate to saturated. Several counties reported half an inch of rainfall up to 6 inches in some areas. Producers in Jim Hogg County reported rainfall totals of 18-20 inches since June 1. Corn fields were in good condition and in silking stages. Sorghum was in good condition. All fields headed out and most changing color. Some corn and sorghum fields were harvested.

Bermuda grass fields were cut and baled. Many were producing good yields. Rangeland and pasture conditions were good to very good due to recent rainfall and providing plenty of grazing. However, some areas remained drier with fair rangeland and pasture conditions. Meanwhile, ranchers continued to provide supplemental feed for cattle and wildlife. Feed prices continued to rise. In addition, cattle prices were up as well. Watermelon and cantaloupe fields continued to produce.

This entry was posted on Thursday, July 22nd, 2021 at 4:44 pm and is filed under articles, News & Updates. You can follow any responses to this entry through the RSS 2.0 feed. Both comments and pings are currently closed.